Springbank distillery is one of the last surviving operations in Campbeltown. The distillery is unique in that it releases three distinct different single malts: Springbank, Hazelburn, and Longrow. 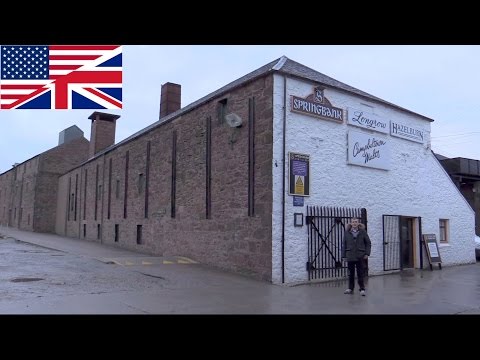 Springbank distillery is one of the last surviving operations in Campbeltown. The distillery is unique in that it releases three distinct different single malts: Springbank, Hazelburn, and Longrow. Each of the single malts has a completely different taste and character, but they do complement each other as part of a full set of Highland, Island, and Lowland whiskies. For the collectors who covet getting that official bottling in their cabinet, Springbank is a dream or a nightmare. The distillery has released a seemingly limitless number of official bottlings of each of the single malts.

In addition to the official bottlings, there have been a number of independent releases of Springbank, which became smaller and smaller after the year 2000. Cadenhead's and Signatory Vintage have released the majority of these bottlings, although Douglas Laing and Murray McDavid have also released bottlings.

Springbank distillery draws the water used in its production from Crosshill Loch. The capacity of the distillery stands at about 2 million liters a year. Springbank is the only distillery in Scotland to execute 100% of the production process on site. The distillery centralizes the entire process, from the selection of the barley to bottling after dozens of years. Campbeltown was once the whisky producing capital of the world. But now only three distilleries are active in the town.

Springbank has a rather unusual set-up, with one wash still and two spirit stills. The wash still has a capacity of 10’000 liters, and the two spirit stills each have a capacity of 6’000 liters. All of the three single malts produced at the site are distilled in a slightly different manner, which contributes to their different flavors. Springbank is distilled two-and-a-half times, Longrow twice, and Hazelburn is distilled three times. All of the pot stills at Springbank have a traditional ‘Speyside’ shape, with wide spherical lids, and tall conical necks. Additionally, the distillery is one of the very few sites in Scotland that still bottles on site.

Springbank is one of only a handful of distilleries that still uses traditional floor malting methods. The distillery buys in its barley from local farms. Some of the malt used at Springbank is peated, and other batches are not, depending upon the intention of the distillers for the spirit.

Springbank has an on-site complex that is comprised of both dunnage and racked warehouses. The distillery uses a combination of different casks in the maturation process, depending upon the intention that the distillers had for the single malt. They include Ex-Bourbon, as well as Sherry hogsheads and butts.

The first recorded whisky distilling in Campbeltown dates back as far as 1591.  Around the turn of the 17th century, the town became the heart of illegal whisky distillation in the country. In the 1660s, the Mitchells, the family who would go on to found Springbank, emigrated from the Scottish Lowlands to Campbeltown in order to expand their family business of distillation. The Reid Brothers, who were in-laws of the Mitchells, founded Springbank in 1828 on the site of a previous illicit still that was operated by Archibald Mitchell. Upon it’s founding, Springbank became the 14th licensed distillery to operate in the town. In 1834, Mary Mitchell established the Drumore distillery, in response to the increased demand for Springbank whisky.

In 1837 the Reid family encountered financial difficulties and John and William Mitchell bought the distillery. In 1872, John and William parted ways, with William leaving to carry on the family tradition of distilling by founding the neighboring Glengyle distillery. In 1897, the J & A Distillery Company was founded in order to administer the running of the distillery, and John Mitchell continued to operate the site alongside his son, Archibald.

With the turn of the century came a change to Springbank’s flavor and identity. The distillery started to produce spirit that was less heavily peated, in keeping with the changing tastes of the time. In the 1920s, some of the distilleries in Campbeltown began to cut corners in their distillation, which resulted in the plummeting in the reputation of the single malts from the region and a subsequent decrease in business. Although many distilleries in the town were forced to close, Springbank survived.

However, the distillery was forced to close in 1926 due to effects of prohibition upon the whisky market. The distillery began operating again in 1933, after Prohibition was repealed. Springbank resumed its thriving ways, although many of the other distilleries in the Springbank area weren’t so fortunate. By 1934, there were only two distilleries operating in Campbeltown. The beating heart of Scotland’s whisky industry had been put to sleep.

In 1970, Springbank released its oldest bottling to date – a 50 year old whisky which was distilled in 1919. A few years later, in 1979, the distillery was forced to close once again due to the harsh economic climate of Britain at the time. The distillery did continue to sell some of its reserve stock during this time, but business was spotty at best. After almost a decade of being closed, a limited amount of production was restarted at the site in 1989. When the distillery was re-opened, the Springbank Distillery Company Limited was formed, which today is still run by the Mitchell family, making it the oldest family run distillery in Scotland.

As the whisky industry began to stretch its legs and return back to its previous level of operation, the demand for Springbank increased. Longrow quickly became a standard release from the distillery, and as the distillery moved into the 1990s, it began to move closer and closer towards a system of being extremely self reliant. The sites’ malting floors, which were previously closed in 1960, were reopened in 1992. In 1997, the site began to distill Hazelburn for the first time, which went on to become the third standard release bottling from the site.

Springbank has continued to expand its collection of bottlings in recent years, becoming the first producer of an entirely organic single malt.

Springbank has excellent facilities for visitors, including the ability to tour the site, an extensive gift shop, and a small museum about the history of the distillery.

Share your experience with other whisky lovers. Write a note about your trip to the Springbank distillery.