The Mortlach distillery was the first of Dufftown’s famous seven distilleries. The distillery was also the first legal distillery in the town, which is quite a distinction, especially when we consider the impressive amount of illicit activity that was occurring around the site at that time. 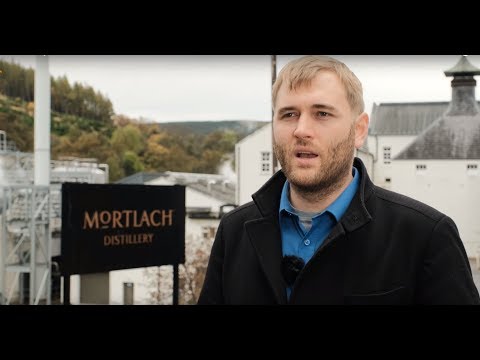 For a long time, the closest thing that Mortlach distillery had to an official bottling was the series of licensed releases by Gordon & MacPhail and the Flora & Fauna bottle with an age of 16 years. In 2002, the distillery finally released its first official bottling, a 19 year old 'Manager’s Dram'. Following this, in 2004, a Mortlach 32 year old was released, and in 2009, a 12 year old was also released. Today, the distillery’s official range of bottlings is made up of a 'Rare Old', 'Cask Strength', 18 year old and 25 year old. In addition to these official releases, there have been a number of independent bottlings of Mortlach. In addition to the official and independent releases, the malt whisky from Mortlach is a major component in many of Diageo’s blends, including Johnnie Walker, especially for the 'Black Label' blend.

The production capacity of Mortlach is 2.9 million liters per year. The water used in production is drawn from the Dykehead Catsvraig, which lies in the Conval Hills of Speyside. The distillery has traditional-style larch wood worm tubs, which is very rare to find in a modern-day distillery; only few distilleries across Scotland still use them. In 1971, the distillery switched from direct heating to steam heating its stills.

The new make for Mortlach Whisky is blended from various double and triple distilled spirits, resulting in a 2.81 times distilled whisky, so to speak. The big Wash Still and the big Spirit Still work together, resulting in a classic double-distilled spirit. The second and third Wash Still also produce an intermediate Spirit. This is then transferred to the Wee Witchie, a special Spirit Still on which a small witch is depicted.

Normally, after the distillation in the Wash Still, the tails of the distillate are not collected, but only the pot ale. In the case of Mortlach, however, these tails are distilled in the Wee Witchie together with various other heads from other stills, a process called 'dud run'. In the Wee Witchie a triple distillation happens and mixed with the double distilled raw brandies from the other stills the result is a spirit distilled exactly 2.81 times. The original recipe for this distillation technique was developed in his time by Alexander Cowie, who lead Mortlach until 1923. Since then the concept has been a well-kept secret, but is still used.

Mortlach has no modern heat exchanger condensers, but still uses traditional worm tubs to condense the new make spirit. In these worm tubs, there is less copper contact, which does not make the spirit softer like in other distilleries. It can rather be described as very racy, robust and spicy. Not for nothing Mortlach Whisky is also called 'The Beast of Dufftown'.

Mortlach’s malting floors were used until 1968, at which point the distillery switched to sourcing their malt from an industrial source in Speyside. The malt is unpeated and the barley itself is sourced from north Speyside. The malt at Mortlach is milled in a traditional porteus malt mill rather coarsely than in other distilleries.

The Mash Tun at Mortlach comprises up to 12 tons of malt grist with water. The temperature is 64° C. Mashing is a continuous process here: hot water is continuously sprinkled over the malt grist to wash starch out of the grain. Also the temperature of the added water is continuously increased, from 72 to 88 degrees. At the end of the mashing process, 54,000 litres of sugary 'wort' are ready to be used in the fermentation process.

At Mortlach there are six washbacks with a volume of 54,000 litres each. All fermentation tanks are traditionally wooden, made of Oregon Pine. When the 'wort' is filled into the washbacks, it is first cooled down to 16° C; if the outside temperature is cooler, it is only cooled down to 18° C. With the temperature control the speed of the fermentation can be influenced. Mortlach is fermented for about 50-60 hours to get a strong, spicy wash, that is, the beer without hops that is distilled.

Mortlach has five traditional “dunnage-style” warehouses, complete with earthen floors. Mortlach is known for its use of Sherry casks in the maturation process, although more recently the distillery has also begun to use ex-bourbon white oak casks as part of its maturation process.

The Mortlach distillery was the first of Dufftown’s famous seven distilleries. The distillery was also the first legal distillery in the town, which is quite a distinction, especially when we consider the impressive amount of illicit activity that was occurring around the site at that time. James Findlater founded the site in 1823. A year later, in 1824, Donald McIntosh and Alexander Gordon became part-owners of the distillery. After operating successfully for a few years, the site was sold on to John Robertson in 1831 for the price of £270, which sounds unbelievable in today’s economy. In 1832, the site was purchased by A & T Gregory, and then in 1837, the site was partly bought by James and John Grant from Aberlour. During this time, no actual production took place at the site, as the Grant brothers had the equipment dismantled and brought to the Grant distillery to be used in production there. In 1842, Mortlach was entirely taken over by the Grant brothers, in partnership with John Alexander Gordon.

In 1925, control of the distillery passed to Distillery Company Limited, when they bought out John Walker. DCL transferred the management of the site to Scottish Malt Distillers in 1930. In 1964 a major refurbishment was launched at the site, and all of the pot stills were replaced. The distillery released its first official bottlings in 1996, when a 1972 year old bottling was launched as an official expression. Today, Diageo operates the distillery through the corporate merger of United Distillers. The same year the distillery underwent an enormous £1.5 million renovation, to bring it up to it’s modern-day capacity. Under Diageo’s ownership the distillery has continued to thrive, and hopefully will continue to release new official expressions.

The distillery doesn’t have a visitor’s centre, however, it is possible to book a private tour of the facility.

Share your experience with other whisky lovers. Write a note about your trip to the Mortlach distillery.

Diageo presents new Mortlach range
There will soon be a Mortlach 12, 16 and 20 yo on market
show all headlines
Go to top