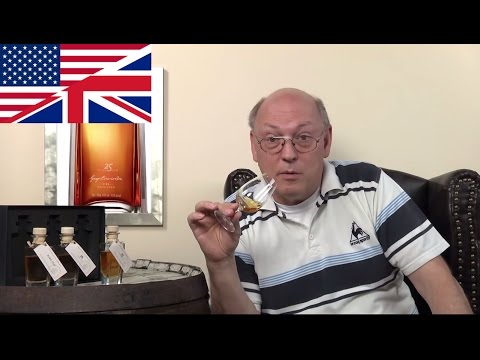 <b>2-Clicks for Your Privacy:</b> <br> Once you click on the play button for the first time, the video will be activated and loaded by YouTube.<br> Please note that data is transferred to the YouTube servers in the course of activation.<br> By activating the video you agree to the transmission and use of your data, as outlined in our <a href="https://www.whisky.com/information/about-us/privacy-policy.html" target="_blank">privacy policy</a>.<br> Please also note the <a href="https://www.youtube.com/static?gl=DE&template=terms&hl=de" target="_blank">privacy policy of YouTube.com</a>.
Skip to Nosing

Fruity nose particularly apple. raisins - If I didn't know better I would have said this was the nose of a sherried whisky.

Rich and biscuity malt. Citrus peel and mixed spices. I feel it could possibly have done with being bottled at 46% for my tastes. I make an effort to taste whiskys without looking at anyone else's notes and I also got the metallic note but just thought it was either a bad bottle or my imagination until I saw Horst's review, very odd.

Short with a bit of fruitiness. Dies out very quickly without much fanfare

Comment:
This is a solid OK. Other than that metallic taste which I'm not a big fan of, and the relatively weak finish there isn't much wrong with it. That said, its a bit underwhelming, and I can think of bottles I'd rather get at that price point.

the taste is strong and mouthwatering - these whiskies are not that old, not a truly refined taste but punchy

a long finish, it is dry at the end

Comment: While this whisky wouldn't qualify as is neither old nor rare, the taste is very pleasant. And since the price for this edition has dropped to much lower levels, it makes it more in line with its overall quality.