On the small island of Jura lies a single distillery the Isle of Jura distillery. It mostly produces Single Malt whisky and is very famous for its official bottlings. 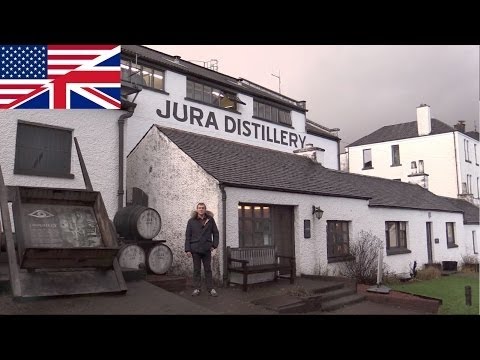 The Isle of Jura’s core official range is made up of four bottlings of Jura: Origin 10 year old, Duirach’s Own 16 year old, Superstition, and Prophecy. All of the bottlings vary in flavor and age: Prophecy is young and quite heavily peated, while Duriach’s Own is not and has a mature character. The Superstition contains a mixture of unpeated as well as peated malts. The 10 years old is the well known standard and was the only available malt in former times. The distillery also has several other bottlings. The Turas-Mara, Elixier 12 years old, 21 years old. Very famous was a Jura 1984 Vintage bottling, which celebrated the the novel Nineteen Eighty-Four by George Orwell which he wrote on the island from 1946 to 1949. Finally there had been an Archive Bottlings Range, which features three 'Boutique Barrels' bottlings from 1993, 1995 and 1999.

In something of a novelty situation, the official bottling seriously outnumbers independent bottlings from the Isle of Jura. There have been a few performed by such bottlers as Douglas Laing and Hunter Laing, which vary in ages and vintages, but the official collection provides a far thorough selection.

The Isle of Jura distillery produces an impressive 2.2 million liters of alcohol a year. A lot of it is sold as single malt. The water used in the production is drawn from the Loch a’Bhaile Mhargaidh, which also lies on the Isle of Jura. Jura is located sixty miles from the Scottish coastline, which adds another dimension to the difficulty of whisky production: lack of accessibility. George Orwell famously referred to the distillery as 'un-get-able', in reference to how difficult it was to access the site. In terms of production support, the distillery boasts six stainless steel washbacks and a semi-lauter mash tun.

The distillery has four pot stills: two wash and two spirit. The wash stills each have a capacity of 24’500 liters, and the spirit stills have a capacity of 15'500 liters. All of the stills have a constricting piece in their necks, which increases the amount of reflux that occurs within the stills. The stills have wide, spherical lids, which are immediately pinched in as the neck begins, to accommodate for the constricting piece which adds so much reflux to the still. The necks then widen again, gradually narrowing into a conical top. Jura’s stills are monsters, standing at 28 feet high. The stills used to be the tallest in the industry until 1843, when Glenmorangie took over the lead. The Pot Sills have an unusual shape, which emphasizes the high ester notes of the barley, and produces a notably lighter and fruitier whisky. The lyne arms that lead out from the pot stills connect to condensers that are located on the outside wall of the still house.

Isle of Jura has sourced its malts from the Port Ellen maltings facility on the nearby Isle of Islay since 1978. These malts are unpeated as well as heavily peated, which gives them a variety in flavor. Port Ellen is meticulous about where they source their malts from, and selects only the highest quality grain, much of which comes from the Speyside region. The peat that is used in the malting process is sourced from the Isle of Jura itself.

Isle of Jura has a series of on-site bonded racked and dunnage warehouses in which the spirit is aged. Isle of Jura uses specially selected American and European oak casks in which to age it’s single malt.

Jura is a very special place – it’s probably the only island in the world where whisky barrels outnumber the human population. The Isle of Jura distillery sits in the island’s only town, Craighead. The distillery has had a two-phase history, much like many other distilleries that have undergone numerous openings and closings. Charles Mackinlay & Company built the modern-day distillery in 1960, with the first distilling taking place in 1963. However, there was a distillery at the site that dramatically pre-dates the modern facility.

In 1831, William Abercrombie obtained the first license for the Isle of Jura Distillery. Production launched soon afterwards and was met with great success. In 1853, the distillery changed hands, with Norman Buchanan from Glasgow taking over the lease. Just over a decade later, in 1867, Buchanan filed for bankruptcy, and J. & K. Orr snatched the distillery’s up for grabs ownership. In 1876 the license was transferred again, this time to James Ferguson and Sons. In 1901, the Ferguson family reportedly fell into a conflict with the then Laird of Jura, Laird Colin Campbell, which resulted in them closing the distillery and dismantling and selling the equipment.

Following this, Isle of Jura lay silent for many years, until the equipment was reawakened in 1960, when Charles Mackinlay & Company embarked on a reconstruction and extension of the distillery. Just as the distillery reconstruction and expansion launched, the newly formed Scottish & Newcastle Breweries obtained Charles Mackinlay & Company, but decided to go ahead with the redevelopment of the distillery anyway. In 1962, Scottish & Newcastle Breweries formed Mackinlay-McPherson for the operation of Isle of Jura. In 1963, for the first time in over six decades, the first distilling occurred at the Isle of Jura distillery.

Isle of Jura has an award-winning visitor’s centre, which offers a full tour of the facilities, a gift shop, and café. Although Jura is notoriously difficult to get to, it is more than worth the effort.  It’s also possible to tour the Port Ellen Maltings during the annual Islay Malt whisky festival or by special arrangement.

Share your experience with other whisky lovers. Write a note about your trip to the Jura distillery.