The two Jim Beam distilleries produce the best selling Bourbon in the world. But besides its mass products they also have different high class products in its range. 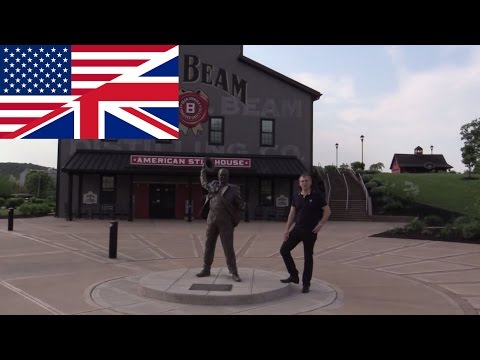 The two Jim Beam distilleries produce the best selling Bourbon in the world. But besides its mass products they also have different high class products in its range.

Knob Creek for example stands for a premium whiskey. The range consists of a nine year old, a rye and a single barrel. They are only sold in flat bottles and sealed with a wax cap to differentiate from other bottles from the company.

Jim Beam also has a series of small batch Bourbons designed to be super premium. They are the Booker's, Baker's, and Basil Hayden's. These Bourbons are between six to nine years old and exclusively selected from the big warehouses to match a certain flavour profile.

Jim Beam bottles are marketed worldwide and the demand is huge. This means the supply has to be massive also. There are two plants near the town of Clermont Kentucky that produce the Jim Beam spirit. The first is the main plant with the tourist office and the historic buildings as well as a huge production complex. The second one is the Booker Noe plant a few kilometers to the south. It is an industrial place with the copied equipment from the original plant.

The white dog (raw whiskey) is made on a very high column still. The inside of the column still is made of copper, because it reacts with the spirit and removes some of the harsh tasting components. After the distillate has run through the doubler the alcohol level has risen to 67.5% ABV (135 Proof). The Bourbon law requires the distillery to distil the spirit below 160 Proof. The reason for this is the preservation of the taste of the original mash, that would be left behind if distilled higher. Jim Beam is far below this level. The whiskey enters the barrel at an even lower ABV and therefore does not need to be as much diluted for bottling as a high AVB barrel. The final result is a whiskey with more flavour from the oak barrel and less water. However this means that Jim Beam must fill more barrels to produce the same amount of bottles. In the end the Beam distillery must charge higher prices for the use of more barrels.

The distillery uses a mixture of corn, malted barley and rye. The corn serves as a main source of sugar. The malted barely adds natural enzymes to split the starch into sugar. And finally the rye supplies a bit of spiciness into the mixture. The corn is cooked in the mash tun at about 105°C (220°F) at a slight overpressure. After the high temperature cooking you add the other two ingredients at different temperatures and mix it very well. The enzymes of the barley split all the starch of the corn and the rye into sugar. This sweet water is the base for the then brewed beer.

Jim Beam has a lot of barrels to store. The total number of barrels in the warehouse in the year 2015 was about 1.9 million (eq. 380M liters or 100m gal). They are all stored in warehouses up to 9 stories high. These warehouses belong to the highest in the industry. The higher the barrel stores in a warehouse the hotter it becomes during summer. Over these heat cycles the barrels expand and open up the pores of the wood. Now the whiskey penetrates the cask wall and gets into contact with the American white oak. The alcohol in the spirit solves the caramelised wood sugars and adds a vanilla and caramel touch to the whiskey. In addition the whiskey turns from colourless to a golden brown.

The Jim Beam distillery was founded shortly before the end of the 18th century. It was not Jim Beam who founded the distillery but Jacob and Johannes Beam (Böhm) who sold their whiskey under the name Old Tub.

The real 'Jim Beam' was James Beauregard Beam who ran the distillery right before and after prohibition. Right when prohibition started a raging mob tore down the distillery leaving Jim with no business behind. During these bad years Jim founded a quarry and actually sold stones. He was an entrepreneur and liked to run his own business. But he stated that he didn't really enjoy the stone business. Shortly after President Roosevelt signed the 21st amendment and made alcohol legal again Jim started to built a new distillery in Clermont Kentucky. He got together with some other businessmen and founded the the James B. Beam Distilling Company. Shortly known as Jim Beam.

Today the master distiller is Fred Noe (2nd half in the video above) and he is the seventh generation of Beams producing fine Bourbons.

The distillery went under major construction around 2012 and new facilities for visitors have been created. People may now experience all the production steps from mashing to bottling. People can even buy personalised Knob Creek bottles with their fingerprint in the wax cap and their name engraved in the glass.

Share your experience with other whisky lovers. Write a note about your trip to the Jim Beam distillery.