The Glengoyne distillery is the most southern distillery of the Scottish Highlands. The Distillery was founded in 1833 by a local farmer called George Connell. It is an half an hour north west of Glasgow. 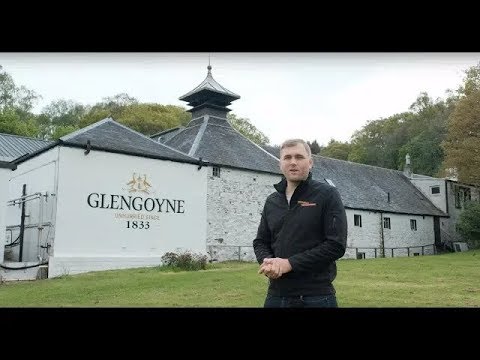 The core range of official bottlings from the Western Highland distillery of Glengoyne, which lays less than a hour north west of Glasgow, includes a 10 year old, 12 year old, 15 year-old, 18 year-old, 21 year-old, 25 year-old and a Cask Strength Edition. The distillery also does a range of special bottlings, which is comprised of a 35 year old and a Teapot Dram, inspired by the distillery's tradition of giving three drams to it's stillmen during a long shift. Independent bottlings are rather rare, although during the nineties Douglas Laing did perform quite a few. These were mainly 12 and 13 year old bottlings.

Glengoyne's production capacity stands at 1.1 million liters, and the water used in production is drawn from the Campsie Fells located just behind the distillery. The distillery uses six washback made out of Oregon pine wood in the distillation process. Glengoyne is unique because it effectively produces Highland Single Malt that is then matured in the Lowlands. It lies upon the Highland Line, which is the official division between the Highlands and the Lowlands. Glengoyne's location has also been attributed with its success, as it is one of the most easily accessible distilleries in Scotland, located only half an hour drive from Glasgow away.

Glengoyne's still room hosts one wash still and two spirit stills. The wash still has a capacity of 12'500 liters, and the spirit stills a capacity of 4'000 liters. Both the wash and spirit stills are fitted with reflux bowls in their intermediate sections. These reflux bowls increase the efficiency of the stills. The stills have a unique shape, with wide, spherical lids, which are shorter than the average ones, and spherical intermediate sections with tall conical necks, and almost horizontal lyne arms. Glengoyne enjoys the slowest distillation process in the UK, which encourages the formation of 'esters' in the spirit, giving Glengoyne its characteristically sweet, smooth taste.

Unlike many other distilleries, Glengoyne does not dry its malt using burning peat, but instead uses dry air. The effect that this has is two-fold: when it arrives the distillery, the malt smells like untreated malted barley, and it means that every taste note that the drinker observes in the single malt is the product of the influence of the distillers, not the peat. Glengoyne had it's own floor maltings until 1910, since when it has bought them from a maltster.

Glengoyne has a series of dunnage warehouses on site. The spirit is matured in oak casks from Spain, which have previously been used to age sherry. Glengoyne puts a particular emphasis on the selection of wood to be used in the casks, as they believe that the high quality of the cask is one of the elements that gives Glengoyne it's smooth, mature taste.

A local farmer, George Connell, founded Glengoyne in 1833. The area in which it was founded was a hotbed of illicit whisky distillation, with up to eighteen illegal stills operating. Connell founded Glengoyne under the name 'Burnfoot Distillery'. It was renamed Glenguin Distillery in 1861, then, in 1906, became Glengoyne, when the Lang Brothers bought the site. Production commenced for much of the twentieth century without incident, until 1965 when Robertson & Baxter took over the site. At this point, a huge rebuilt was launched, which included increasing the number of stills from two to three. This is fairly unusual, as most of the distilleries in Scotland have an equal number of wash and spirit stills. During this time, Glengoyne also became a favorite of the late Queen Mother, earning it a 'By Royal Appointment' seal.

After the renovation, production resumed with its normal level of quiet success. In 2001, Glengoyne Scottish Oak Finish (aged 16 years) is launched as the first single malt stored in Scottish oak casks. Two years later, in 2003, Ian MacLeod Distillers Limited bought both Glengoyne and also the brand Langs from the Edrington Group for £7.2 million. Since the Edrington Group acquired Glengoyne, the distillery has continued to release new bottlings such as a 16-year-old Shiraz finishes, two Warehousemen's Choices, and the relaunch of the 10 and 17-year-old bottlings.

Glengoyne has a great visitors centre, which attracts about 40'000 visitors a year. The distillery offers a multitude of tours of the facilities, and also a gift shop and visitor's centre that gives guests the 'Glengoyne experience'. The distillery is also a popular site for wedding receptions, and it is possible to hire out the entire complex (although they probably lock up the warehouse, just in case some of the guests wanted to leave with a souvenir).

Share your experience with other whisky lovers. Write a note about your trip to the Glengoyne distillery.

jothisler
27. Jul 2019
I visited in July 2019. There are some stairs at the start of the tour that might be difficult for some people but after that there are few issues and few stairs. You get your first sample Glengoyne 12 year at the 2nd stop and can enjoy it during the short film. If you purchased a ""two whisky tour"" then you'll receive your 2nd sample at the final stop which is the gift shop. I purchase a 700 mll bottle of 12 year with the tour discount but found it at a roadside stop for the same price. This was my first tour so I can't comment or compare other distilleries. The explanations of the distilling process were easy to follow and I think could be enjoyed by anyone.
Navigate
Top 10 collected