Only a few distilleries in Scotland are still private owned. The Speyside distillery Glenfarclas is one of them. Maybe it’s the best known among them and maybe it’s one of the most successful family owned distilleries in Scotland ever. But for sure the Grants, owners of Glenfarclas, are very proud of the private status as their slogan “The Spirit of Independence” shows. Six generations of Grants have shaped Glenfarclas, from 1865 until today. This guaranteed a constancy of quality and foresight that a durable product as whisky needs. There is hardly another distillery that has as much high quality and old whiskies in its warehouses as Glenfarclas. 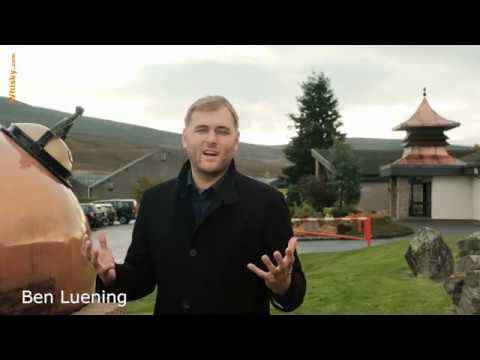 Only a few distilleries in Scotland are still private owned. The Speyside distillery Glenfarclas is one of them. Maybe it’s the best known among them and maybe it’s one of the most successful family owned distilleries in Scotland ever. But for sure the Grants, owners of Glenfarclas, are very proud of the private status as their slogan “The Spirit of Independence” shows. Six generations of Grants have shaped Glenfarclas, from 1865 until today.  This guaranteed a constancy of quality and foresight that a durable product as whisky needs. There is hardly another distillery that has as much high quality and old whiskies in its warehouses as Glenfarclas.

Glenfarclas literally means “Glen of green grassland” but for many whisky lovers it means “Sherry”. The distillery that is situated in the heart of the Speyside just 5 miles south of Aberlour traditionally matures in Sherry casks. This core theme wasn’t changed even though sherry casks have become more and more expensive.  The range of single malts is wide and lasts from 10 year old whiskies to a 40 year old release. Glenfarclas whisky is full bodied, presents aromas of dried fruits, sherry, honeycomb, butterscotch, light peat, nuts, marzipan… sometimes less of the one, sometimes more of the other, depending on the release you chose.

With their famous Glenfarclas 105 they bottle a single malt with 60% ABV which is cask strength although it’s no single cask release.

The most famous releases of Glenfarclas are the Family Casks. One cask from every year between 1952 and 1994 was chosen and the edition is still growing. These absolutely top whiskies are bottled at cask strength und uncolored.

Production at Glenfarclas is production in the old, traditional way and half of the 30 employed people are engaged in milling, mashing, distilling and in the warehouses. Production takes place twenty hours a day in three shifts. Only three ingredients are required to produce Glenfarclas Single Malt Scotch Whisky: malted barley, yeast and fresh water. Traditional craftsmanship, the shape of the still, the quality of the oak casks and a perfect selection and blending of the matured whisky make up the secret of the Glenfarclas whisky - which is, to be exact, no secret, because the distillery is opened to public and you can look behind the scenes!

Since the 1970s malting isn’t done in the distillery itself. Malt is delivered and stored in 11 big silos (“hoppers”) that have a capacity of 330 tons each. After milling the malt to grist in a ratio of 15% husky, 80% grits and 5% flour (the Glenfarclas mill does 6 tons per hour) it is placed in the mashtun and mixed with hot spring water. First filling is done with water of 64°C to wash the sugar out; the sweet water called wort is pumped out and a second filling with 78°C follows. The water of the third filing with 80°C just contains a small amount of sugar and serves as the first filling of the next mash.

The wort is pumped into coolers to achieve a temperature of 20°C that is an ideal temperature for the yeast to care for fermentation. The draff that is left when the wort was pumped out through sieves is taken from local farmers as cattle feed.

The mashtun of Glenfarclas is one of the biggest in the Scottish whisky industry with a diameter of 10 meters and can pick up about 16.5 tons. The whole progress of mashing takes about 11 to 12 hours - this includes cleaning as well.

When the wort is cooled down it is pumped into the 12 washbacks of Glenfarclas that have a capacity of 45.000 liters each and are made of stainless steel. The cultured distillers’ yeast is added in a ratio of 1% and ferments for about 50 hours.  When fermentation ends the resulting wash has an alcohol content of about 8 % ABV.

There are three wash stills (29.600 l) and three spirit stills (25.000 l) at Glenfarclas. First distillation  in the wash still leads to low wines with 23% ABV. Second distillation is split into foreshots, heart and feints and the heart of one distillation will approximately deliver 4.000 liters with 68% ABV.

The pot stills of Glenfarclas are directly fired with gas, which is a very traditionally method. Rummagers, which are revolving chains, are there to make sure that there’s no residue burning in at the bottom of the stills.

Before being filled into casks the new spirit is reduced to 63.5% ABV, using spring water. Glenfarclas uses Spanish sherry casks to mature its spirit and stores them in dunnage warehouses, three stacks high, with earth floors and stone walls in a very traditional style.

After maturation Glenfarclas whisky is bottled at Broxburn Bottlers not far from Edinburgh. Glenfarclas bottles at natural color.

The History of Glenfarclas started when the farmer Robert Hay built a distillery on the Rechlerich Farm in 1836. On June 8th, 1865 John Grant became tenant of the farm and bought the distillery for the price of £511.19S.0d. He was 60 years old and married to Barbara with whom he had six children. He was a successful farmer and breeded Aberdeen Angus cattle on several farms he owned. While he stayed at his Blairfindy Farm his distant Cousin John Smith cared for the Rechlerich Farm and the distillery, supported by John’s Sohn George Grant. John Smith left Glenfarclas in 1870 to build another distillery, Cragganmore.

When John Grant died in 1889, George became owner of farm and distillery, but he also passed away just one year later, leaving Glenfarclas to his sons John and George and his widow Elsie.

When whisky boomed in the 1890s the brothers decided to expand and went into a partnership with Pattison, Elder&Co. which was ill-fated and nearly led to a financial ruin of the Grants. During 15 hard years the distillery was saved. The company was turned into J & G Grant, but John retired early and George led the family business on his own.

The fourth generation of Grants stepped into business with George Scott Grant, who was Chairman of Glenfarclas for 52 years until he died in 2002. Thanks to him to lay down a big stock of casks and deciding not to give that much whisky away to blenders as it had been done before. That’s the reason why Glenfarclas has hands on great old casks.

John L.S. Grant followed his father George S. Grant as a chairman in 2002. At that time he had already been working in the company for nearly 30 years. He personally selects the Spanish sherry casks that will mature the Glenfarclas whisky and sources the malted barley for the production. The Family Casks releases are due to him.

When John’s son George S. Grant joined Glenfarclas in 2000 it was the sixth generation to rule the family business. He works as Glenfarclas Brand Ambassador yet and introduces the whiskies to old and new markets.

In 1973 Glenfarclas opened a new visitor center where tours can be booked and whisky and other products are offered in the distillery shop.

Share your experience with other whisky lovers. Write a note about your trip to the Glenfarclas distillery.