The building in which Glen Moray is housed started out as the West Brewery, founded in 1828. In 1897, its owners, Robert Thorne & Sons, converted the site into a two-still whisky distillery. 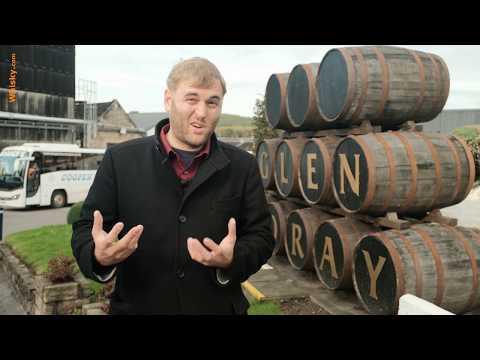 The Speyside distillery of Glen Moray has a wide selection of official bottlings, which includes a 10 year old and a 12 year old. There is a history of maturing in  wine barrels (Chenin Blanc, Chardonnay).  Although they are not as plentiful as the official bottlings, there are also a few independent bottlings available on the market.  Duncan Taylor, one of the most prolific independent bottling companies operating in Speyside, has performed the vast majority of these independent bottlings. Their Glen Moray range includes an 11 year old, a 20 year old, and a 22 year old, all of which date from the 1990s.  Glen Moray is also used in the Whisky Label 5 blend, which is also owned by the distillery’s current owners, La Martiniquaise.

Glen Moray’s production capacity sits at a very respectable 2.3 million liters a year. The water used in Glen Moray is drawn from the nearby River Lossie.  One of the unique distinguishing facets of the distillation process at Glen Moray is that the condensors are located outside of the stillroom.

Glen Moray used it’s own floor maltings until 1958, when they were replaced with a Saladin’s box.  The Saladin box was used for two decades, until malting at the distillery was completely decommissioned in 1978. The distillery now sources its’ maltings from an industrial site, although they are grown locally.  The maltings used in the production of the whisky are unpeated.  In most recent years, Glen Moray has started experimenting with using peated maltings, producing it’s first ever batch of peated spirit in 2009.

As part of the tour of the site offered at the distillery, it is possible to visit Glen Moray’s bonded warehouse. As you stand there, surrounded by thousands of casks of single malt, you are able to witness row upon row of barrels slowly turning from raw spirit into matured single malt. To help illustrate the process, Glen Moray has two casks fitted with transparent ends, so that visitor’s can observe how much spirit it lost to the “angel’s share”, as well being able to see how different charring techniques on the inside of a barrel can influence the color of the whisky.  Glen Moray uses mostly ex-bourbon barrels sourced from the United States to age their single malt in.

The building in which Glen Moray is housed started out as the West Brewery, founded in 1828.  In 1897, its owners, Robert Thorne & Sons, converted the site into a two-still whisky distillery.  Thorne & Sons also ran the nearby Aberlour distillery, the maintenance of which took up the majority of their time, leaving the Glen Moray distillery to run into ruin, eventually closing in 1910. The owners of the Glenmorangie, Macdonald & Muir, then purchased the near-derelict distillery.

Production resumed at the site under its new management in 1923, and continued with only a single years’ break, in 1932, until the distillery underwent a massive reconstruction in 1958. Two decades later, the distillery went through another expansion when it doubled its pot still count from two to four.  In 1996 Macdonald & Muir changed it’s name to Glenmorangie plc. The company continued to put a higher level of focus on the Glenmorangie brand than Glen Moray, especially when Glenmorangie plc themselves were taken over by the luxury goods retailer Louis Vuitton Moët Hennessey in 2004. This change of management didn’t last very long, with Glen Moray being sold to the current owners La Martiniquaise in 2004.

The two conversions that Glen Moray has gone through have meant that the distillery doesn’t have the most traditional layout, with the buildings forming not the most aesthetically pleasing square. However, Glen Moray is an excellent example of why a distillery should not be judged by its cover, gaining a reputation as being one of the friendliest distilleries to visit.

Glen Moray has an excellent visitor’s centre, which offers tastings, daily tours of the grounds and buildings and a well-stocked gift store.

Share your experience with other whisky lovers. Write a note about your trip to the Glen Moray distillery.