Tullibardine is actually not the oldest Scottish Distillery but regarding the first step of the whisky production it is one of the Methuselahs of the business: The visit of King James 4th of Scotland of the local brewery situated here before is known as the first recorded purchase of beer. That was in 1488, long before in 1949 the first spirit was distilled here at Tullibardine in Perthshire. 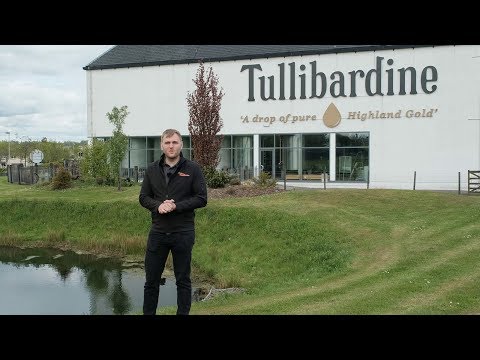 There has been a total revamp of Tullibardine’s whisky range in 2013: Tullibardine Sovereign, Sauterness, Sherry and Burgundy, malts with no age statement, were established. The special wood finish always takes about 12 months. Tullibardine 20 year old and 25 year old were released as a supplement and meanwhile Tullibardine started a new series called Custodian Collection. First edition was a 60 year old (!) Tullibardine that had been distilled in 1952.
The Tullibardine whiskies of former times were known as being a bit oily and transporting floral and nutty notes. The new set up by the new owners kept the light, floral and malty character but the intensive wood management doesn’t’ make it easy to define a distinctive distillery character.

In 2015 Tullibardin’s goal was to produce 2.5 million liters and as they just bought buildings of a former retail park to create more warehouses and a bottling plant we can suspect an increasing production. In the 1970s Tullibardine was a famous brand, sold all over the world and the new owners are on their way to recreate this success.
Whisky production stands and falls with the water supply and this is one of Tullibardine’s big Brownie points: The Danny Burn that provides the distillery with fresh and clean water is fed with water that comes from the surrounding Ochil Hills. They were once formed with layers of basalt and sandstone and when the water reaches the distillery it has taken a 15-year-lasting way through all these natural filters.
Production at Tullibardine Distillery still follows traditional methods and renounces modern computerized technologies as far as possible.

The semi lauter mashtun of stainless steel can take 6 tons.

In 1973 the number of stills here at Tullibardine was increased from two to four by Invergordon Distillers who had taken over the distillery in 1971. The wash stills are 21.500 liters by volume, the spirit stills 16.200 liters.

There are some bonded warehouses on site of Tullibardine Distillery although there had been more in former times: Some of them meanwhile were used as sales rooms for the shopping center of Blackford in which the distillery now is situated. But as said before Tullibardine is in a process of recreating warehouses to get more space for its maturing casks.

When in 1488 King James 4th of Scotland stopped at Blackford to purchase beer from the local brewery he probably didn’t know that this incident would still be mentioned hundreds of years later. But his stop resulted in a very honorable distinction: In 1503 the brewery that had been built long ago in the 12th century was awarded the first Royal Charter by James IV for its marvelous beer production.

These original brewery buildings were converted into the Tullibardine Distillery by William Delme Evans in 1947. In 1949 the first spirit was produced.
Brody Hepburn bought Tullibardine in 1953 but was itself purchased by Invergordon Distillers in 1971. They increased the capacity by doubling the number of stills to four and made the brand Tullibardine famous. When Tullibardine was taken over by Whyte & Macky in 1993 it only took one year until it was mothballed. It almost took ten years until Tullibardine got back into production after it had been aquired by a private consortium for £1.1 million. Since 2011 the distillery is in the possesion of the French wine and spirits group Picard Vins & Spiritueux that already had had its hands on the whisky brand Highland Queen.

There’s a nice visitor center at Tullibardine where different tastings and tours are offered.
In the “1488 Café” you can enjoy homemade scones or other cakes.

Distillery shop and visitor center can be reach by phone (01764 661809) or email (shop.admin@tullibardine.com)

Share your experience with other whisky lovers. Write a note about your trip to the Tullibardine distillery.