It’s one of the best known and bestselling whiskeys of the world: Jack Daniel’s Tennessee Whiskey. Home of Jack Daniel’s is Lynchburg, a town about 70 miles south of Nashville. It’s a whiskey that is produced obeying all the regulations necessary to be called Bourbon - but it’s even more: 1944 Jack Daniel’s achieved the official approval that Tennessee Whiskey is an own classification, characterised by the additional charcoal mellowing called “Lincoln County process”. 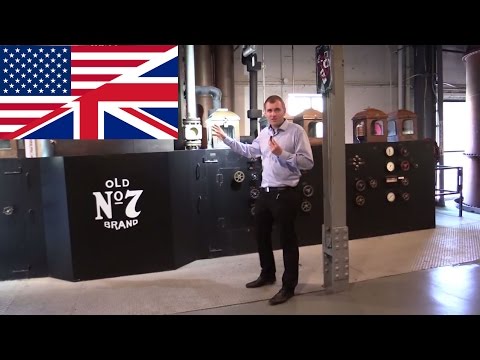 Jack Daniel’s is very proud to stick to the old traditional recipe that founder Jasper Newton “Jack” Daniel developed. Some say that it was his seventh experiment to generate the perfect mash for the whiskey so the whiskey is still called Jack Daniel’s Old No. 7. Some say it was the number Jack Daniel got from the government for the registration of his distillery, others presume the 7 might have been a tracking number of the railway company on a barrel. We don’t know this for sure but we know that Jack Daniel’s Old No. 7 is one of the famous whiskey bottlings of the world. It’s a whiskey with a light and smooth body, a bit oily with sweet aromas from honey and vanilla, with notes of oak and chocolate.

Not only the recipe but also the production process is done in a traditional way at Jack Daniel’s. There are computers and modern machines, of course, but the way of mashing, distilling, charcoal mellowing and maturing is still the same as it was in the nineteenth century.

As mentioned Jack Daniel’s is produced using the original recipe developed by founder Jasper Daniel himself. It’s based on a mash composed of 80% corn, 12 % malted barley and 8% rye. Corn and barley are from the US, the rye from parts of Canada. The grain is stored in big silos; there are eight for the corn, two for the rye and two other ones for the barley.

One of the secrets of the smooth taste of Jack Daniel’s Tennessee Whiskey is the water they use here: It’s taken from a spring on side. On its way the water passes metres and metres of limestone that filters out the contained iron. The result is very smooth water without any bitterness, ideal for the mashing of the corn, barley and rye. No enzymes are added to start the conversion from starch to sugar; just the natural enzymes of the malted barley are at work. Jack Daniel Distillers use the old sour mash process which means a small part of the previous mash is added to the new batch.

There are 64 fermenters at Jack Daniel’s with a capacity of 40.000 gallons. That sounds very much indeed - but the production of Jack Daniel’s has to satisfy a steadily growing whiskey market. Jack Daniel’s uses an own yeast strain to ensure the same quality of fermentation and the same aroma over the years.  This yeast is added to the mash to work on the fermentation for a few days until the beer is ready.

This beer is now pumped into the column stills that are steamed from the bottom. The stills are made of copper which is very important because copper works as a catalyst for making the spirit smoother. Spirit enters a doubler, as well made of copper, to see a kind of a second distillation. Afterwards it is cooled down through the condensers and ready for the next step. If the spirit was now filled into barrels and matured you would call it Bourbon. To make sure it’s Tennessee Whiskey charcoal mellowing follows.

The new spirit, called white whiskey, now is lead into big tanks that are filled with charcoal. This happens drop by drop and the white whiskey runs through the charcoal very slowly. While passing the 10 feet (3.3 metres) of grained and compressed charcoal the spirit is filtered and gets even smoother as it already is before. This charcoal is produced on side by slowly burning down staples of wood, to be exact the wood of hard sugar maple trees.

Jack Daniel’s uses multi-storied warehouses. Some are three stories high, some even seven stories. They contain seven thousand to several more thousand barrels. As the temperatures are different at the bottom and the top of the warehouses the whiskey matures slightly different according to where a barrel is stored. This is utilised by Jack Daniel’s and the barrels for the different products are stored at different positions in the warehouses. They maturation usually takes four to six years at Jack Daniel Distillery, depending on the respective product and the individual effect of the barrel.

The barrels are all new made of American white oak and toasted before being filled with the white whiskey. Jack Daniel’s has an own cooperage to ensure the quality of the casks.

As Jack Daniel Distillery is a very big producer of whiskey there is not only one bottling line but different ones for the different whiskeys, for example the Jack Daniel’s Single Cask Edition. Bottling, labelling, corking and quality check all happen in line. The common label by the way has not always been black. Jasper Jack Daniel himself started with a green label and only his nephew changed it to black after Jack died.

Jasper Newton Daniel, called Jack Daniel, was born in Lynchburg. We don’t know exactly the date of his birth, some sources say 1846, some talk about 1850, some even precise it and say it was in September.  Jack’s mother died not long after his birth and because of the 10-12 children at home (different statements again) and the re-marriage of his father Jack left home at the age of six (or seven?). He was then raised by Dan Call, a friend of the family and the local Lutheran Minister. Dan not only was a Minister but also a distiller and Jack learnt all about whiskey. When he was about 14 he bought the distillery at Lincoln County from Dan, but shortly after moved to a piece of land at Lynchburg. Here the spring water was a perfect premise for good whiskey. Jack optimized the production process, found his perfect whiskey recipe and registered the distillery, being the first one in the US.

Jack Daniel never married and had no children, so he made his nephew Lem Motlow his heir. Jack died in 1911 (it is said he broke his toe when he kicked a safe and he suffered some years on an infection and blood poisoning until he died). Lem Motlow made an excellent job and when prohibition started at 1910 in Tennessee, he moved to St. Louis and distilled further on. 1920 prohibition spread and the Jack Daniel Distillery closed down. Lem Mortlow went back to Lynchburg and having become a Tennessee state senator his efforts for getting allowance to re-open a distillery at Lynchburg where successful at last. Distillery started in 1938, but he had to promise not to allow the consumption of the whiskey there.

After Lem Motlow died in 1947 his children took over the business until they sold the Jack Daniel Distillery to the Brown-Forman Corporation in 1956.

Even though Jack Daniel’s Tennessee Whiskey has made Lynchburg and its Moore County famous and brings more than 200.000 tourists here each year the consumption of alcohol is still prohibited here. It’s because of a law dating from the time of prohibition that hasn’t been abolished yet. There’s one little exception: Selling of whiskey is allowed at the distillery and its visitor centre.

The visitor centre was completed in 1999 and tells the story of Jack Daniel and the distillery.

Tours last about one hour and are offered Monday through Sunday from 9.00 am to 4.30 pm

Share your experience with other whisky lovers. Write a note about your trip to the Jack Daniel's distillery.