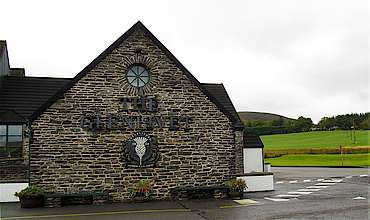 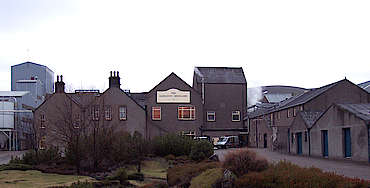 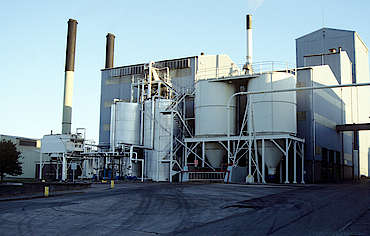 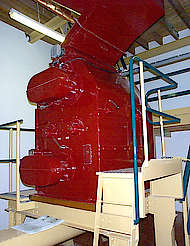 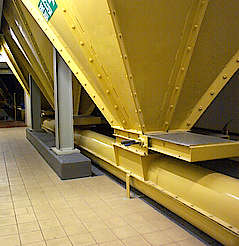 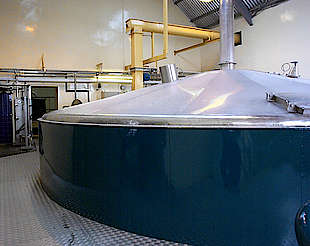 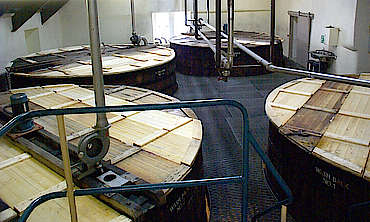 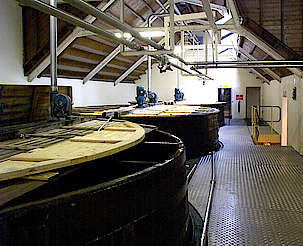 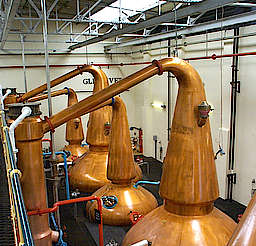 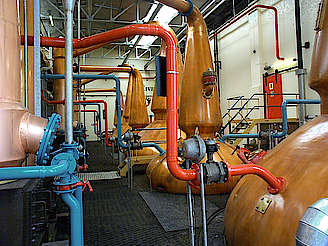 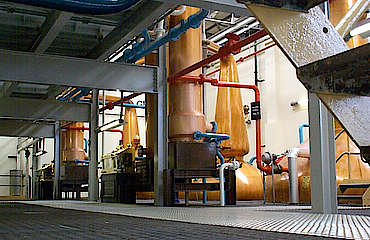 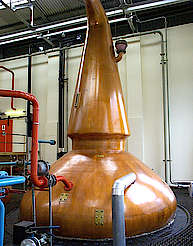 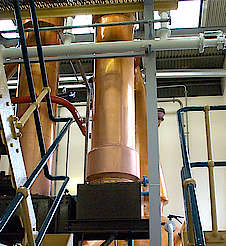 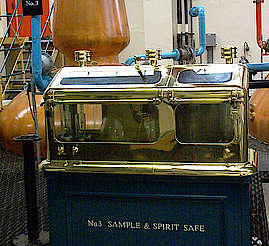 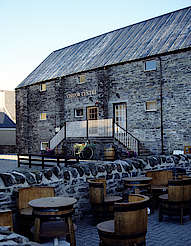 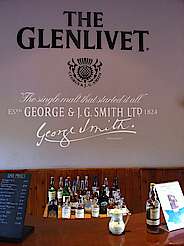 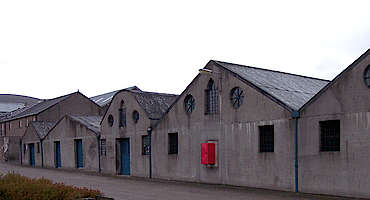 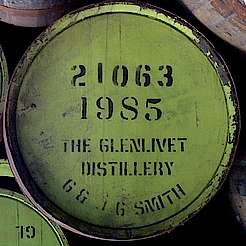 The Glenlivet distillery is one of the most famous Scotch distilleries in the world. Translated from Galic "Glenlivet"means Valley of the Livet" The Livet is the river that runs through the valley.

The Speyside Single Malt of Glenlivet has an impressive range of official bottlings. The core range is comprised of a 12 year old, 15 year old, 18 year old, 21 year old and the XXV. The distillery also boasts such themed collections as the Limited Range, Nàdurra Range, the Winchester Collection, and Travel Exclusives. There have also been a series of independent bottlings performed at the distillery, mainly by Gordon & MacPhail. One of Gordon & MacPhail’s most exclusive bottlings of Glenlivet, was a 62 year old whisky that was casked in 1952. Gordon & MacPhail actually have a whole range of bottlings that are performed at Glenlivet: Smith’s Glenlivet. This range consists of a 15 year old, a 21 year old, and a series of rare vintage bottlings, which date as far back as 1946.

The water used in production is drawn from Josie’s Well. The production capacity of the distillery stands at an incredible 10.5 million liters a year.  The fermentation time at the distillery is 50 hours, which is pretty long. The distillery’s modern mash tun allows the distillers to get the maximum possible malt sugar from the grist. The distillery still uses wooden washbacks, which are far harder to clean that their modern stainless steel contemporaries, but it is told, that the use of wood allows for the creation of subtle and nuanced flavors and aromas in the Whisky.

Glenlivet was driven by eight stills: four wash, four spirit. The wash stills have a capacity of 15’000 litres, and the spirit stills have a capacity of 10’500 litres. The lantern still shapes are unique to Glenlivet: when the stills needed to be replaced, the original design by George Smith was carefully re-created by the modern coppersmiths. The constricting piece in the intermediate section of both the wash and the spirit stills allow for maximum contact with the purifying copper.  The long, narrow shape of the necks of the stills ensures that only the lightest vapours reach the top. The size and shape of the stills at the Glenlivet has remained the same for over 150 years, an example of the distillery’s commitment to tradition.

2010 saw a tripling of the capacity to 10.5 million litres of spirit a year with the construction of a new still house and an increase to 14 stills.

The Glenlivet used it’s own floor maltings until 1966, when they were decommissioned. Today, the distillery sources its maltings from professional maltsters, as do many other distilleries. Crisp Maltings in Portgordon is the specific industrial site that provides a lot of the malt used in the production of the Glenlivet. The malt used in production is unpeated, so that the distillers can take advantage of the full spectrum of flavors that the malt contains.

As soon as the spirit is distilled, it is moved off-site to the nearby town of Keith, where the alcohol content is reduced slightly. The spirit is then filled into a carefully selected combination of European and American oak casks. The casks are then brought back to the dunnage warehouses located at the distillery’s site. The on-site warehouses currently house over 65’000 casks of maturing Single Malt.

When Glenlivet was founded in 1824, it was part of a construction rush that occurred in the wake of the government reducing the cost of the license needed to legally distill Whisky in the UK. Prior to the introduction of this cheaper license, much of the Whisky production in the UK, and particularly Scotland, had occurred illicitly. This new bill was the Government’s effort to establish some kind of order in the market. George Smith, the founder of Glenlivet, who was a farmer who rented property from the Duke of Richmond & Gordon, was one of the first distillers to step forward and enter into the process of gaining the new license. Smith had been an illegal distiller himself, but had quickly realized that he could make a far larger profit by going legitimate.

In 1824, the distillery was built at Upper Drumin, and began to operate under the guidance of George and his son John. Smith’s choice to obtain a license was viewed as treacherous by his neighbors, who also distilled illegally. Smith began to receive threats to burn his newly built distillery to the ground, with him in it. Consequently, Smith began to carry two pistols with him at all times (the same pistols are now displayed at the distillery). Threats aside, there could be no doubt that the distillery was doing well. In 1840, Smith bought another property, Delnabo Farm, located near Tomintoul, and founded another distillery there, named Cairngorm – Delnabo. In 1845, Smith bought another three farms, and also established distillation facilities there. Even with all of these properties hard at work, Smith was unable to meet demand.

In 1864, Smith formed a business relationship with Andrew P. Usher, a Whisky agent, and Glenlivet becomes one of the first distilleries to export its product to enormous success. In 1871, George Smith passes away and the management of the distillery is taken over by his son John Gordon. By this point, there had been a surge of distilleries establishing themselves around the River Livet, many of which started using the name “Glenlivet” in some form or capacity.  John Gordon started a lengthy legal battle, and in 1880 Glenlivet was granted the sole right to call itself 'The Glenlivet'.

1890 brought a disastrous fire, which raged through the distillery and destroyed much of the property.  John Gordon took advantage of the rebuilt to expand the site, and in 1896, two new stills were installed. In 1901, John Gordon himself passed away, and in a repeat of history, the distillery once again passed to the next generation, with John’s nephew George taking over production. The distillery passed down through the family after George’s death, too, with George’s son, George Smith, taking over production in 1921. In 1953 George & J. G. Smith Ltd merged with J. & J. Grant of Glen Grant Distillery, forming the  Glenlivet & Glen Grant Company Ltd. The second half of the twentieth century brought a series of hand-changes and merges to Glenlivet. In 1970, Glenlivet & Glen Grant Distillers Ltd merged with the Longmorn-Glenlivet Distilleries Company and Hill Thomson & Co. Ltd to form The Glenlivet Distillers Ltd. Eight years later, Seagrams buys the distillery, and a visitor’s centre was opened.  In 2001, Pernod Ricard and Diageo bought Seagram, giving Pernod control over the Chivas Group. Glenlivet has continued to go from strength to strength in recent years, becoming one of the most successful Single Malt 'brands'.

Glenlivet has an award-winning visitor’s centre, which includes a gift shop, café, tours of the facilities, as well as an exhibition.

Share your experience with other whisky lovers. Write a note about your trip to the Glenlivet distillery.

There are no user notes for this distillery yet.
Oops, an error occurred! Code: 20230203062618bbf4ed5d
Go to top
This website uses cookies, to provide best functionality for you.
further Informations & Settings
Only necessary Accept all