The distillery was founded in 1898 by John Duff. He was the owner of the Longmorn Distillery. The distillery lies in the heart of the Speyside between the Town Rothes and the city Elgin. 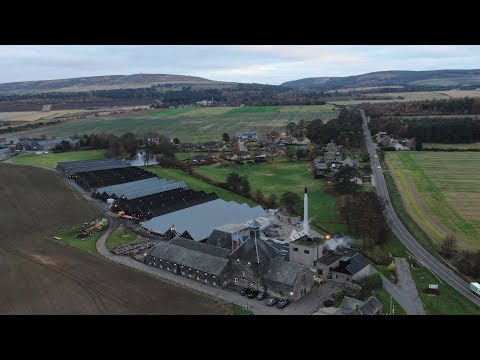 The distillery character of Benriach would best be described as fruity, floral with honey notes. You almost certainly find at least a small undertone of these notes in every Benriach bottle.

Benriach uses the wood finish quite often and creates a wide spectrum of whiskies with this. They also combine the sweetness of most finishes with a high peat smoke level. The Peated Wood finish range has a lot of very strong tasting whiskies in it. Benriach even uses very old whiskies in their wood finishes. It is not uncommon to see a 20 or 30 year old Benriach in a wood finish.

There are not many independent bottlings of Benriach.

The yearly production is at about three million litres of alcohol per year. The distillery produces on four stills and produces its own malt. Benriach is a very traditional distillery from the Speyside.

It lies in the Moray region of Scotland, just in the middle of the Speyside region. The water for the production comes from the Burnside Springs.

The Pot stills are very pear-shaped, which is not very typical for a Speyside whisky. Moreover, the neck doesn't have a constricting piece or a reflux bowl. The lyne arm is falling after the bent and the condenser is located outside of the building.

The Benriach produces its own malt. Its not stated if they can supply all of their production output with their malting floors, but you can still experience the malting business when you take a tour through the Benriach distillery. The malting floors had been mothballed for quite some time, but the old equipment was still in good condition to be used again.

Benriach uses both un-peated and peated malt for their whiskies.

Finally the distillery was freed by an independent consortium called the BenRiach Distillery Company Limited. Now the Company produces their own whisky under their own flag.

There is no visitor center at the Benriach distillery, but you can still book tours of the distillery on their website. The tour is worth taking, as the distillery is one of the handful of distilleries that still have the full production depth in-house: malting, mashing, fermentation, distillation and maturation.

Share your experience with other whisky lovers. Write a note about your trip to the Benriach distillery.

BenRiach celebrates 120th anniversary with marsala single cask
On the occasion of their 120th anniversary, the Speyside distillery has released a limited, 20 year old single malt from a marsala hogshead
28
June
2018