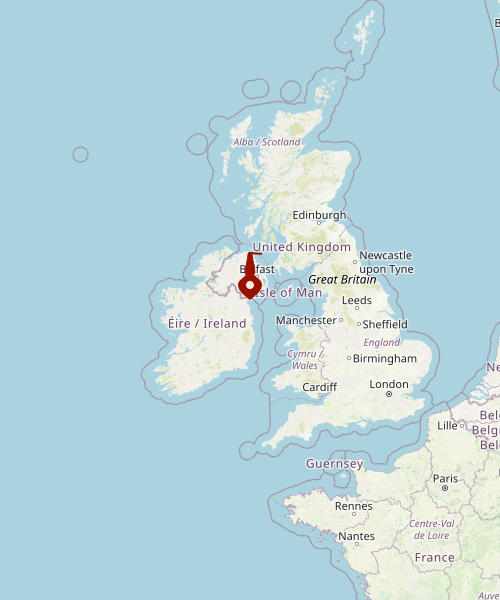 Founded as late as 1987, for many years Cooley was the only independent Irish distillery of its time. Since 2011 the well-known labels such as Kilbeggan, Tyrconnell, Locke's or Connemara have belonged to Beam (now Beam Suntory).

The whiskeys from Cooley Distillery are different from those of the other Irish producers in various aspects. Cooley uses double distillation, not triple distillation.
Tyrconnell is a very fruity and malty single malt whiskey, which is available as a no-age-statement standard bottling and as a 10-year-old with different finishes (sherry, port, Madeira).
Smooth and oily, but also youthfully fresh and fruity is Locke's single malt whiskey, which is available as an 8-year-old bottling.
Kilbeggan is a classic Irish blended whiskey. With its smooth grain and malt notes it is very approachable. But Kilbeggan also offers grain whiskeys with sweet vanilla notes and distinct oak flavours.
An exceptional label in the Cooley range is Connemara single malt whiskey: unusually heavily peated, Connemara is velvety smooth, sweet-fruity and has a distinct vanilla note. And above all the untypical smoke.

The Cooley Distillery is two in one: On the one hand single malt whiskey is produced here in pot stills, on the other hand grain whiskey is distilled continually in patent stills in order to produce blended whiskeys. Cooley has an impressive production capacity of 650,000 litres of malt whiskey and 2.6 million litres of grain whiskey.

The Cooley Distillery works with a mash tun from the former Moffat Distillery. There's no shortage of water: The Sliabh na Gloch River, coming from the Cooley Mountains, provides the distillery with plenty of this important resource.

Cooley has four wash backs for malt whiskey and six for grain whiskey, all of them made of stainless steel.

Since 1989 two relatively small pot stills with very long, narrow swan necks have been producing the smooth, fruity malt of Cooley. Because of the shape of the pot stills, the spirit is in contact with the copper necks much longer than at most other distilleries. The pot stills were previously used in the Old Comber Distillery near Newtownards.
The tall column stills have been in use for much longer. Before the Teeling family took them over, they were used to produce neutral alcohol and industrial alcohol commissioned by the government.

Before John Teeling bought the old distillery and converted it into the Cooley Distillery, it was used to produce industrial alcohol, which needed no storing. No wonder that the storage space for Cooley whiskeys became scarce soon. Today the better part of the production is still stored in the warehouses of the old Kilbeggan Distillery.
Most whiskey from Cooley is matured in ex-bourbon casks. Other cask types, such as sherry, port or Madeira casks, are only used for special finishes of some labels such as Tyrconnell or Connemara.

When John Teeling established his distillery in Riverstown on the Irish Cooley peninsula in 1987, it was the first time in 100 years that a new distillery had been founded in Ireland. He had already decided to establish an Irish distillery in 1971. Back then he wrote two papers at Harvard University that dealt with the rapid decline of the Irish whiskey production. In the 19th century Ireland had a leading position on the international spirits market. Out of more than 100 distilleries back then, only two had remained by 1970.
John Teeling bought a former distillery called Ceimici Teoranta, which was state-run and produced potato spirit.
Teeling renamed the distillery Cooley and essentially established two distilleries that could produce two kinds of whiskey with different procedures: a grain distillery, which provided the basis for light, mild blends with the existing column stills, and two years later an additional pot still distillery for the production of pure pot still single malt. some renowned Irish labels such as John Locke were taken over by Teeling and added to the range. By buying the old Kilbeggan Distillery (formerly called Locke's Distillery), Teeling created space for storing the whiskeys from Cooley Distillery, since stocks grew rapidly. Until 2007 Kilbeggan had only warehouses and a visitor centre, but since then it has been distilling whiskey again.
The international success and rising sales of Cooley whiskeys aroused the interest of some spirit companies. In 2011 Jim Beam bought the Cooley Distillery for 95 million US dollars. However, the Teeling Whiskey Company secured a significant share of cask stocks by contract and now bottles this whiskey under its own label.

The Cooley Distillery itself has no visitor centre.

If you want to know more about the art of distillation and the history of Kilbeggan and the other Cooley labels, visit the Kilbeggan Distillerry Experience in Kilbeggan.