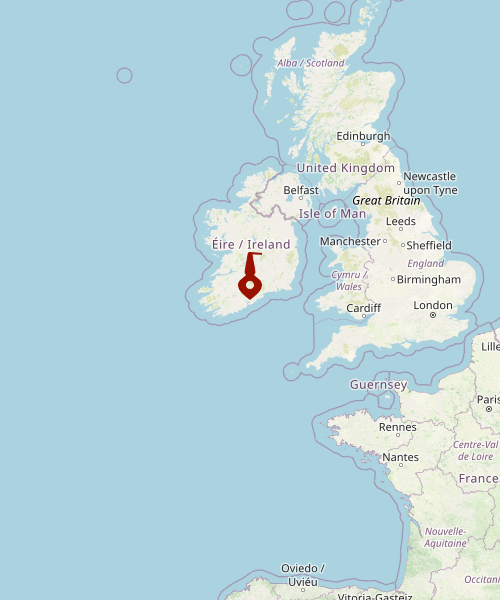 In Midleton near Cork the typical Irish single pot still whiskey is produced, which is unique to Ireland. Unlike with single malt, not only malted barley but also unmalted barley is processed in the triple pot still procedure. Those who favour the classic production style will even insist that the share of unmalted barley be higher. Different whiskey labels produced at Midelton have different proportions of malted/unmalted barley. The best-known single pot still whiskeys are Redbreast, Midleton, Powers and Green Spot Whiskey. Friends of these whiskeys especially like their purity, smoothness and fruitiness.
Redbreast 12 Years and Redbreast 15 Years rank among the most popular single pot still whiskeys and are created from bourbon and sherry casks. Round, smooth fruit aromas are in harmony with spice and oak notes and offer a rich, long-lasting finish.
However, beside the single pot still whiskeys, the Irish blended whiskeys are among the top-sellers of Midleton Distillery. They are produced with a share of pot still whiskey, but the major part is a base of grain whiskey distilled in column stills. Fine and spicy, but especially incredibly smooth are these blended whiskeys, which have made Irish whiskey so popular among whisky connoisseurs who look for a very mild and smooth drink.
The flagship of the Midleton Distillery is without a doubt Jameson Whiskey, which tops both Midleton's production and sales figures. 56 million bottles sold worldwide in 2014 speak volumes. 40% of the sales were achieved in the USA alone. The classic Jameson standard is the no-age-statement bottling, which can probably be found in every liquor store or drinks department of supermarkets. It's the best-selling Irish whiskeys worldwide. But Jameson has a much broader range to offer, among others a 12-year-old and an 18-year-old blended whiskey.
Until recently also Tullamore Dew was produced here in Midelton, but in 2014 it found its way back to its original home in Tullamore when William Grant & Sons opened the new Tullamore Distillery there.
Other examples for blended whiskeys produced in Midleton are Paddy, Powers or Midleton Very Rare.

Midleton essentially consists of two different whiskey distilleries: One produces grain whiskey in column stills; the other one produces the typical Irish single pot still whiskey in pot stills. In order to meet the rising demand for Irish whiskey, the Midleton Distillery recently expanded. Around 200 million euros were invested in new wash backs, stills and warehouses. The production capacity was thus increased to enormous 64 million litres of alcohol per year.

Beside malted and unmalted barley and the grain for the grain whiskey, of course also water plays an important role in every production step, but especially during mashing. The Dungourney River has always been Midleton's water source and even used to be its power supply. The giant water wheel of the Old Midleton Distillery can still be seen.

Malt is sourced from Irish maltings, but the milling of barley and malted barley takes place on site. Before modernisation the wet-milling process was used, i.e. the grain was treated with steam and steeped in hot water. Since 2012 the grain is milled dryly in hammermills.
Mashing at Midleton takes place in different mash tuns, depending on whether the mash is used for single pot still or for grain whiskey, and depending on the label for which the single pot still whiskey is intended. The composition of the single pot still whiskeys differs from label to label with regard to the ratio of malted and unmalted barley.

Midleton uses triple pot still distillation. The number of pot stills has been increased from four to seven, each with a capacity of 80,000 litres. After having been run through three pot stills, the spirit has a strength of 83 - 85% ABV.
Since Midelton produces different single pot still whiskeys with different characters, the distillation procedures aren't the same. They vary with regard to the separation of the middle cut from the foreshots and feints, so the new spirit contains sometimes more, sometimes less strong aromas. There is the "Heavy Pot Still" (HMP for heavy modified pot) where the middle cut is separated very generously, "Light Pot Still" (LMP for light modified pot) where the middle cut is separated very cleanly, and in between there's MMP (medium modified pot), also known as Midleton Mod Pot. Gradations in these different separations (LMP1 - HMP4) bring in additional variety.

When you produce a lot of whiskey, you need a lot of casks and a lot of space in warehouses. Midleton whiskey is matured in casks made both from American oak and European oak. The casks are not disassembled for shipping but arrive in their original state in order to guarantee the best possible condition of the casks and to prevent them from drying out. Sherry and port wine casks are therefore filled immediately after arrival in order to prevent the bacteria and yeasts from further work. 70 to 80 casks can be filled simultaneously. Bourbon casks only wait for 1 - 3 months until they're filled with new make.
Filling and storing is computer-controlled and monitored. Romance and tradition had to make way for modern and economically efficient production procedures. Especially the new bottling plant and the 40 newly built warehouses in Dungourney leave no doubt about Midleton being a modern industrial plant, not a small traditional distillery.

The Midleton Distillery in its contemporary form has only been established in 1975. In 1966 the three companies John Jameson & Son, The Cork Distillery Company and John Power & Son merged and became the Irish Distillers Group. They decided to concentrate production on one spot and built the modern Midleton Distillery near Cork, right next to the Old Midleton Distillery, home of Jameson whiskey. Production in the new distillery started in 1975. All partners moved production into this new distillery and closed their old distilleries.
Since 1975 the Old Midleton Distillery, whose origins lie in 1825, has also not been active anymore. It had been founded by three brothers from the Murphy family who produced Cork Distillery Whiskey (meanwhile called Paddy) here. Back then they installed the largest pot still of the world with a capacity of 33,600 UK gallons (approximately 150,000 litres).
In 1988 the spirit corporation Pernod Ricard took over Irish Distillers Group.

The visitor centre has found its home in the original Old Midleton Distillery. It was named "Jameson Experience" after the best-known whiskey label of the distillery. The history of this whiskey is also the focus of a comprehensive exhibition. Since 2013 the Irish Whiskey Academy has been offering three-day seminars that deal comprehensively with whiskey production.

Different tours through the Old Midleton Distillery, including the cooperage and the warehouses, are offered. They vary in length and focus on different aspects.