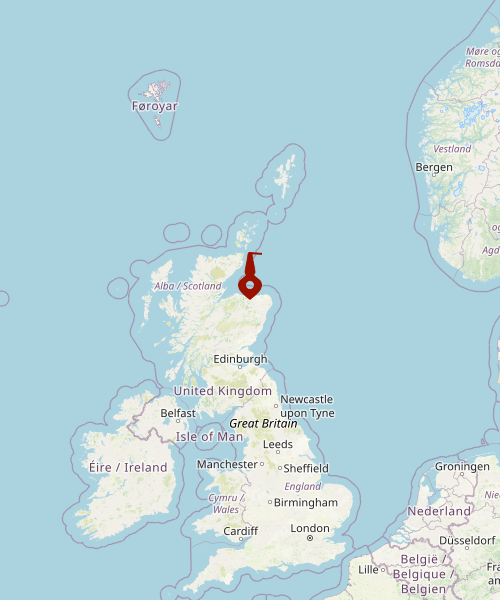 In 1893, John Morrison, bought the land on which Knockdhu was built from the Duke of Fife. Morrison was acting on behalf of the Distiller's Company Limited. Knockdhu was the first distillery that the company constructed themselves.

The small Speyside distillery of Knockdhu has a very impressive range of official bottlings called An Cnoc, despite its relatively small size and production capacity. The distillery has two ranges: one that focuses on the modern bottlings, and one that focuses on the distillery's vintage releases. The modern range includes a 12 year old, 16 year old, 18 year old, 22 year old, 35 year old, a Travel Retail Exclusive, a 2000 and a 1975 bottling. Each of the bottlings has a distinctive flavor and character, which allows them to start as individual entities. The vintage range is rather extensive, and includes bottlings from 1999, 1998, 1997, 1996, 1995, 1994, 1993, 1991, and 1975. Old bottlings with the distillery name on it are extremely seldom.

2014 appeared a new range of peated whisky, which were named after the different tools used to harvest peat from the mosses.

Independent bottlings from the site are virtually impossible to find, but Adelphi has performed a handful of bottlings, mainly in the early 1990s. These are extremely difficult to track down on the market today. Knockdhu is also used as a core blending component in the Inver House blends.

The distillery draws its water from burns on the nearby Knock hill. The production capacity of the distillery stands at 1.5 million liters a year, and very unusually, Knockdhu uses a cast iron worm tub to cool the freshly distilled spirit. The distillery uses six wooden washbacks as part of its production process.

In the past, Knockdhu distillery used to only use unpeated maltings, but today, some of the distillery's malt is peated. The level of peating is mild, measuring at about 20 ppm. Knockdhu doesn't peat all of their maltings – the peated maltings is used specifically to produce spirit which is used as a blending component in the Inver House blends. The distillery used to use it's own floor maltings, but now sources them from a nearby industrial source in Speyside. When DCL were selecting a site on which to build Knockdhu, they eventually settled on the final choice due to the local areas' excellent peat.

Knockdhu malts are aged in a combination and American Oak and Spanish sherry casks. The distillery has a series of on-site dunnage warehouses in which the whisky is aged.

A somking chimney in the backIn 1893, John Morrison, bought the land on which Knockdhu was built from the Duke of Fife. Morrison was acting on behalf of the Distiller's Company Limited. Knockdhu was the first distillery that the company constructed themselves. Gordon & Macbey, architects from Elgin, designed the site. Production launched in the October of 1894, a few years before the great 'whisky boom' of the end of the nineteenth century, and continued uninterrupted until 1931, when the site was forced to close.

In 1930, one year before Knockdhu closed its doors, the distillery was taken over by Scottish Malt Distillers. In 1931, SMD decided to temporarily shut the distillery down, but then changed its mind, and production re-launched again in 1933.  Knockdhu enjoyed another fifty years of successful production from 1933 to 1983, when the distillery was closed in the big recession. After production was halted for five years, Inver House, marking Knockdhu's involvement in their blend, bought Knockdhu. Production restarted on the 6th of February 1989. In 1990, the distillery released it's first official bottling, and in 1993, this was followed by another bottling, this time under the name of 'An Cnoc'. Inver House decided to re-name Knockdhu for the purposes of marketing it as a single malt, as they believed 'Knockdhu' to sound too similar to 'Knockando', another Speyside single malt. In 2001, Inver House was purchased by Pacific Spirits UK, who introduced a new 14 year old bottling in 2004. In 2006, the distillery changed hands one last time, when International Beverage Holdings acquired Pacific Spirits. The distillery has continued to enjoy success as it has moved into the twenty-first century, and hopefully, more official and vintage releases will accompany this.

There isn't an official visitor's centre at Knockdhu, but it is possible to take a tour of the facilities, so long as you book in advance. Their official website has the opening hours and relevant contact information.