Whisky is matured for several years in casks of different origins. What influences the maturation process? Why do whiskies from one distillery sometimes taste so differently? 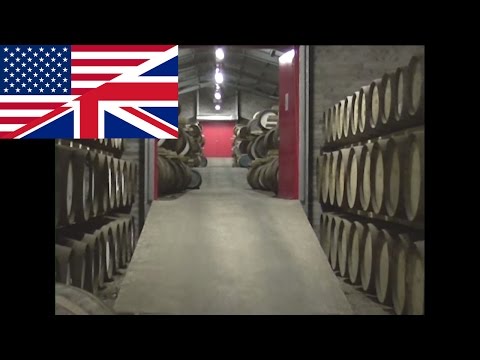 2-Clicks for Your Privacy:
Once you click on the play button for the first time, the video will be activated and loaded by YouTube.
Please note that data is transferred to the YouTube servers in the course of activation.
By activating the video you agree to the transmission and use of your data, as outlined in our privacy policy.
Please also note the privacy policy of YouTube.com.

Numerous experts try to identify the different flavours with physicochemical methods. Even smallest amounts can account for big differences in taste. That's how sensitive our senses are. Researchers measure the various substances like esters, tannins, lactones etc. in ppm (parts per million) and ppb (parts per billion). These small quantities are hard to grasp. Maybe a comparison in terms of time makes it easier: 1 ppb equals 1 second in 31.7 years – a quantity almost inconceivable.

A wooden cask is a small masterpiece of craftsmanship. Although more and more machines are used by coopers today, the actual manufacturing is still done by hand. The planks for the staves mustn't simply be cut at right angles from a log like construction timber. The grain direction of the wood must be taken into account so none of the radial vessels of the wood penetrates the side of the cask. Otherwise too much alcohol evaporates or the cask even starts to leak. Only oak wood is suitable for cask production. Softwood contains resin, which prevents the cask from breathing. Other types of wood emit unpleasant flavours that make the whisky awkward or even unenjoyable. Oak wood from trunks with an age of 70 to 200 years is ideal.

Wood doesn't only contain annual rings but also vessels that lead from the core to the bark radially. The tree transports water and nutrients through these vessels. For whisky, however, these vessels are inconvenient since they make the cask staves leaky. Therefore the wood must be cut according to special patterns (star cut, mirror cut or rift cut) so the annual rings stand vertically. With this method far less usable wood can be cut from one log, so a cask stave is much more expensive than a normal plank.

These planks are then made into staves with trapezoidal wanes (according to the roundness of the planned cask). The newly made staves must then be dried until they reach a level of less than 10% residual moisture. Whether this is left to nature and solar heat or done quickly in modern drying chambers doesn’t affect the quality of the cask.

If the casks were made from this wood, you would get a tight container, but the whisky couldn't mature. From a maturation standpoint, the wood is still dead. Only the following thermal treatment breathes life into the wood. This is a combined process. Only with heat the wood can be bent into the typical cask shape. During 'toasting', the wood is heated up to 200°C in a big oven for approximately 30 minutes, and the firm wood structure is broken up, cellulose is split into wood sugar and caramelises, and the Lignin is partially converted into Vanillin. The cask begins to live in terms of maturation. After the cask has been bent into shape, the inside of the cask is burned (charred) for 3 to 5 minutes and extinguished with water.

If you cut through a stave that was treated that way, you can see a red ring in the wood beside a charcoal layer of several millimetres depth, the so-called 'red layer'. It's the separating layer between the 'activated' and the 'natural' wood. Up to this layer the heat has penetrated the wood and has activated it for flavour extraction.

Charcoal is an extremely good filter and extracts tangy components from the whisky. This is the domain of the American coopers and bourbon distillers, who state the depth of the charcoal layer (grade 1 to 4) when ordering casks. Sherry and port casks are also toasted but only seldom charred. This remains reserved for the Americans, who attach much more importance to 'mild and mellow' whiskey.

However, beside the type of wood and the thermal treatment also the size of the casks influences the maturation process. Whisky matures faster in small casks since the surface area is bigger in relation to the content. The exchange of substances between wood and whisky happens faster.

The most important cask type is the American Standard Barrel (ASB), which holds approximately 200 litres. ASBs are also the 'raw material' for the production of Scottish hogsheads, which hold approximately 250 litres. If you disassemble an ASB and use slightly bigger rings (hoops) for reassembly, you can produce casks with a bigger diameter from the same staves. Out of four to five ASBs you can make three hogsheads. Since the trapezoid shape of these staves is designed to contain 200 litres, you can’t make casks with even bigger diameters from them. The casks would eventually become leaky at the rifts.

In Spain and Portugal, European oak is made into casks holding 500 to 600 litres, which are ideal for the maturation of sherry and port. The Scots call these casks 'butts' or 'sherry butts' and 'port pipes'. Today more and more butts are made from American oak for financial reasons.

The production costs of casks account for a considerable part of the overall costs of whisky production (about 10% to 20%). Increased demand for casks in the whisky industry has also contributed to the rise of cask prices. That's why it makes sense for the Scots to use casks several times. Casks can be used three to four times, then the wood has lost most of its flavours.

1st fill casks are therefore most interesting. ‘1st fill’ doesn't mean the original filling of the cask with bourbon, sherry or port, but the first Scotch malt whisky that's filled into a cask. This 1st fill extracts the strongest flavours from the wood.

Remember: by toasting, the wood is activated, which is signified by the red layer, which separates the active from the inactive wood. So why not scrape out the inside of the cask and toast it again? After toasting the cask is charred anew, and voilà: You have a new, activated cask.

A bourbon cask, used for 2 to 4 years in the USA, can be used for another 30 years in Scotland. After the remanufacturing process described above, called 'rejuvenation', the cask can again be used for 30 to 40 years. And afterwards it might just be rejuvenated again... How old casks can get that way hasn't been tested yet. Casks have only been rejuvenated for about 10 to 20 years. However, not every part of the cask is rejuvenated. The cask usually receives new ends, since the old ones don't survive the rejuvenation and break apart.

Rejuvenation is the future. With little effort the life of the cask can be prolonged significantly. But saving money is not the only factor. It's mainly the flavour characteristics that make rejuvenated casks so popular in the whisky industry.

During maturation three fundamentally different effects in the cask play a role. Let's have a look at the following diagram.

New make whisky has a tangy, metallic taste. If you ever tasted a sample from a pot still or a spirit safe you will always remember this rather unpleasant taste.

With increasing maturation time, this unwanted taste diminishes more and more along the red line. After 5 to 8 years it is usually gone. Since we're dealing with a reduction of taste, the special term is 'subtractive maturation'. That's also the reason why there are only few whiskies younger than 8 years.

With increasing maturation time the whisky takes up flavours from the cask. Initially it's a general wood flavour but especially vanilla, toffee and oak. The wood passes over its character to the whisky. This additive maturation is displayed by the green lines. An old, not very active cask would influence the whisky along the lower dashed line. A 1st fill European oak cask would be represented by the upper dashed line.

5. The Cask Determines the Result

The green lines show the various cask influences during interactive maturation. Since the alcohol in the whisky extracts flavours from the cask, we're actually dealing with dissolution processes. First the curves rise steeply and then flatten more or less strongly. Only the middle curve is more or less ideal. Interactive maturation is the ideal combination of cask and distillery character. The upper dashed line rises much too steeply, and the cask begins to dominate. The lower dashed line shows a cask that has already lost most of its flavour substances. Even after many years the distillery character is dominant.

The upper curve is typical for fresh European oak casks. The cask becomes dominant very quickly, and the whisky is beat by the wood. The lower curve stands for depleted casks that were used too often. While depleted cask can be reactivated through rejuvenation, there's no ‘cure’ for European casks that are too strong. The cask starts to dominate much too fast, while the immaturity might not have been reduced yet.

But there's a trick, namely ‘finishing’. First the whisky is matured in normal American casks until its immaturity has reduced and it has already taken on a basic aroma. 8 to 10 years are enough for that. Then the whisky is filled into European oak casks that held various wines before. You need 1st fill casks for finishing. After 1 to 2 years the whisky is ready. The distillery character and the casks have joined and formed a harmonious whole.

A convenient by-product of this process are European oak casks that have lost their extreme character and are now suitable for longer maturation. However, these refill casks must also not be used too long so they don't get depleted.

Even the winemakers have come to appreciate the extreme taste of this wood. More and more barrique casks are used to mature Southern European red wines for a short period of time – something the Scotch whisky industry can profit from, too.

Meet other whisky lovers, exchange knowledge and facts about whisky.

Horst Luening tastes all the whiskys in the world. You will find everything about whisky and whiskey.

Read an overview about how Scottish Single Malt whisky is filled from the spirit vat into the different casks like American standard barrels,...

Scotch - Maturation in the cask

Read an overview about how Scottish Single Malt whisky is matured in the casks, barrels and butts. See the dunnages (warehouses) and learn about the...

Read an overview about how Scottish Single Malt whisky is distilled. Learn about the spirit and the wash still and how the process effects fusel oils...